There's plenty to learn about how Smartcat calculates cost, so we will try to cover some core features  including the weight of different TM matches, net rates, and cost calculation discrepancies. To get a wider picture, please check our article about statistics in Smartcat.

There are different types of TM matches:

Types of units used in Smartcat for calculating statistics

The following units are supported for statistics:

Please let us know if you would like the system to consider one page as 1,800 characters without spaces instead of 250 words in your account. We will customize these settings by your request.

There are two types of net rate schemes that should not be mixed up:

Client net rate schemes. They are mostly used for calculating statistics in projects to find out the number of weighted words that a particular client should pay. You can customize net rates schemes, and link them to clients. By selecting a client in your project, you can automatically assign the client’s net rate scheme to the project. 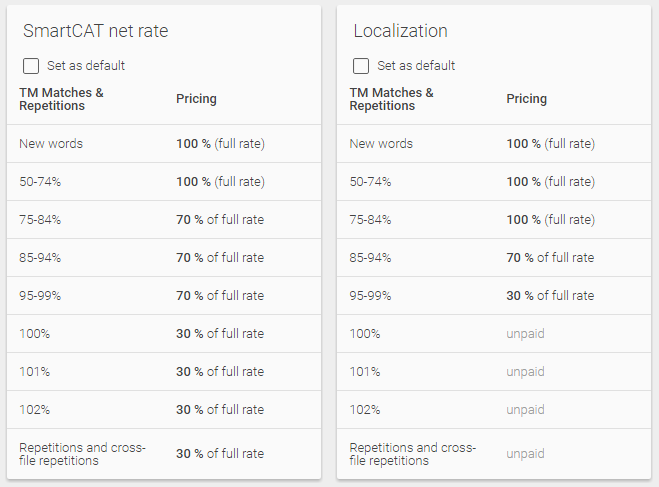 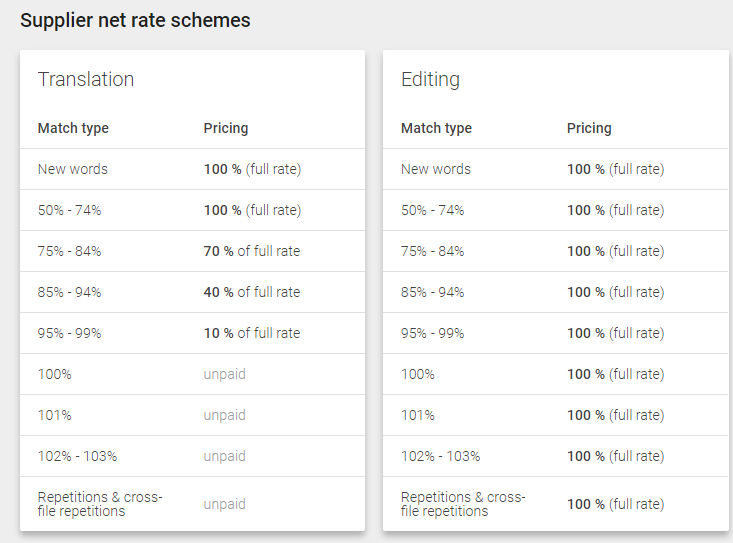 Supplier net rates schemes are fixing at the moment of the project creation, so  if you need to change the match rates, please create a new project.

The cost of work is calculated automatically by multiplying the number of weighted words (payable) of original documents to the linguist's rate per word or, for hieroglyphs, per character rate according to the net rate scheme applied.

TM matches and repetitions are calculated with discounts. Though by default, discounts do not apply for the work of editors, proofreaders, and post-editors.

Let’s take a document containing 31 words, for example. Of these, 14 words are new, 12 words are fuzzy matches, and 7 words are repetitions.

Important: Only the first linguist who has confirmed a segment on a particular stage will be paid for the segment. It relates also to the system and project manager, that is, if the project manager runs MT pretranlsation, let's say, confirming segments on the translation stage, a translator assigned will not get any weighted words by editing and confirming the segments again. You can add one more workflow stage to avoid this.

If you have an opposite case where translators are supposed to revise their work but do not have access to the document anymore, you should cancel the previous assignment and assign them to the last stage of the document.

The system calculates the number of segments translated(confirmed) by each linguist and forms a job per each document. That said, net rate schemes are functioning in real-time, so the system determines whether a translation memory unit has been applied to a segment confirmed. This is especially important when multiple linguists are working at the same stage.

For example, Josh has confirmed a segment at the translation stage; thus, he has recorded the segment in the TM applied to the project. Later working on the same document but upon another range of segments, his peer, Andy, has translated a similar segment(a fuzzy match to Josh's) and will get paid for the words within the segment with a discount. This has happened because Smartcat currently does not discern similarity among the segments until some of them are confirmed, so the system had considered both segments as new ones before the linguists began their work.

The customer can see the cost of assignees' work under the Team tab.

While the assignees can see how much they have earned on the project page in their personal workspace. 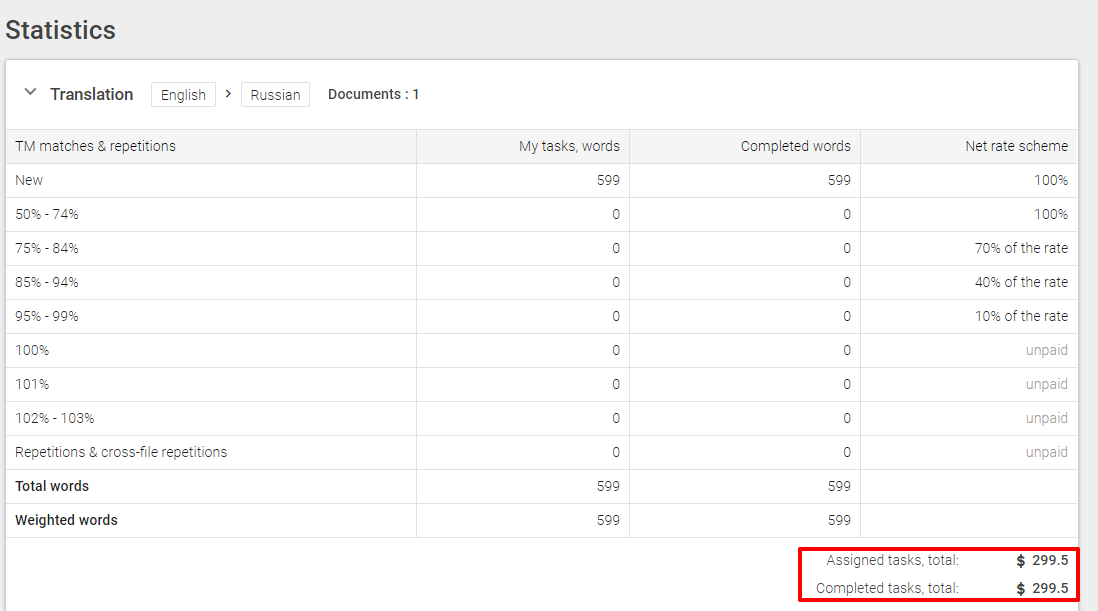 A linguist's rate sets at the moment of accepting the invitation to a project. However, the client can ask the Smartcat support team to change the total cost of a job upon a mutual agreement with the linguist. If that is the case, the support team will require a screenshot from the Chat where the linguist confirms a new rate or cost.

Why the estimated and final costs may differ

The final project cost may not be the same as the estimated cost that you see right after having done an assignment. Here are possible reasons for this:

Finding freelancers on the Marketplace

How to translate video

How to translate XLIFF file

Do you need a human-assisted guidance? 🙌