Once your workflow stages are set, you can proceed with pretranslation where the system inserts TM matches and machine translation into the target text before the work is started. This significantly speeds up the translation process, because assignees will not have to transfer translation memory matches or machine translation into each segment manually. In addition, this allows you to lock segments that have been already translated and approved, reducing the project cost accordingly.

Let’s suppose you have enabled on the project both the TM used for recording translations and machine translation.

On the Workflow Stages step, open the Pretranslation tab. 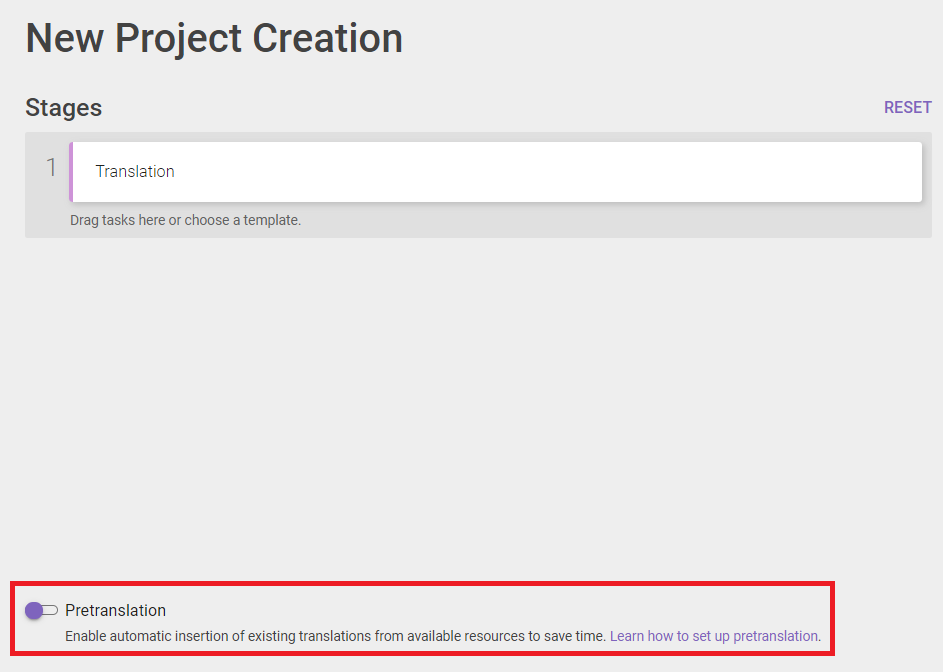 If your text contains a lot of numbers, click Source (Numbers Only) so that all  segments containing only numbers get copied to the translation. Decimal and thousand separators will be converted to match the norms of the target language in most cases.

You can specify whether the system must confirm such segments right away for every stage. Once segments are confirmed for one stage, project participants assigned to this stage will not be paid for editing these segments. And if the stage confirmed is beyond the one that they are assigned to, the segments will be locked. You may use it to lock segments for assignees if there's a need.

The rule for inserting numbers is automatically executed first.

Next, we want to use the translation memory. Press Add Rule.

Select which TM you want to use from the ones you have enabled to a project.

In the field Minimum match percentage, specify the minimum percentage of coincidence between a segment in the document and the translation memory at which the system must insert a translation from the TM.

You can also specify the minimum length of a segment (in words) at which the matches must be inserted using the Minimum word count in a segment field. This can be useful for very short segments that might be image captions and be split. In this case, you eliminate the risk to insert an improper translation.

Finally, specify in the Confirm segments field whether the system should confirm the inserted translations and at which stage.

If you are sure of the quality of the translations in the selected TM and have set the minimum match percentage at 100%, you can specify that the system must confirm at the translation stage for such matches and have an editor review the text, for example. If you have doubts about the quality of the TM or have set the match threshold below 100%, you should not specify automatic confirmation of such matches since there are most likely changes to be edited. In this case, matches will be inserted, but  translators will check them, make corrections if necessary, and then manually confirm them. In cases where you have context matches (101% and above), you could even confirm segments for all the stages of the process.

You can set up rules for each TM in a project (if there is more than one). TM rules are executed one after the other; therefore you should set up rules whereby matches from the most reliable translation memory are inserted first.

You can set up more than one rule for each TM: for example, you can have Smartcat first insert 100% matches and confirm them, and then insert matches that are 75% and up, but without confirmation.

To use the machine translation output to translate all segments for which no matches have been found in the translation memory, hit Add Rule.

During pretranslation, the insertion of machine translation is executed after the other rules.

You can set up and run pretranslation later, but keep in mind that it will only be applied to those segments that have not yet been translated(filled in).

After configuring pretranslation, press the Finish button. Your project has been created.